Lung Hu Chuan consists of a small number of simple techniques that can adapt to fit optimally to any situation. Training an exhaustive number of situational dependent techniques seems senseless because the essential concepts will be lost, and the spontaneity will suppressed.

Nearly endless melodies can be expressed by a creative composer; however they are all based on the simple principle of eight notes (an octave).

Only eight elemental movements form the basis of Lung Hu Chuan. They build both the defensive and offensive systems. Moreover each practitioner can bind their own ideas and thoughts. For example, older techniques from the three sources of Lung Hu Chuan (Tai Chi Chuan, Hsing I Chuan und Pa Kua Zhang) can be used. However, it should only be a few of the simple techniques which have been adapted. 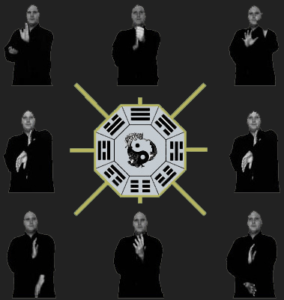 (Click any of the portraits to watch a corresponding short video.)

The above schematic illustrates the angles of attack used in Chinese Martial Arts systems including Lung Hu Chuan. The upper body can be divided into four sectors. Each sector can be protected by one movement which can be seen in the diagonal corners of the Ba Men (8 gates) surrounding the Ba Kua (8 triagrams). Variations of these movements are found in nearly every style.

The angles of attack

The upperbody is divided into four different sections.
We differentiate between attacks on the left and right sides, as well as above and below the elbow (Angles of Attack).
At least one defensive movement is available for the defense of each sector.
In one form or another this basic concept can be found in every serious Martial Arts System.

The fact that all people have the same basic anatomic structure means there cannot be big differences in possibility of technique. Alternatively one can orientate the number of techniques by the number of attacks. That means for every possible attack there is a corresponding counter attack. However, in so doing, the resulting self-defense system would be so enormous and complex, it would be impossible to learn. In Lung Hu Chuan the four corners of the Ba Men diagram show the basic four defensive techniques for all four upper body sectors.

Other Martial Arts systems often follow a similar concept but differentiate into many more sectors. In Karate for example, there are six: Jodan, Chudan, Gedan, and each is divided into left and right sides. In many Philippine styles (Arnis, Kali, etc.) there 12 or 24 sectors defined as angles of attack. There is at least one defensive movement for each angle of attack.

The following schematics for example illustrate the use of divergent vectors of attacking in phillipinian styles. 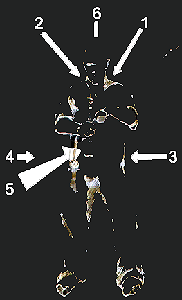 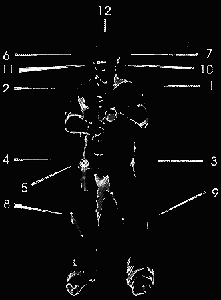 Besides the 4 aforementioned defensive arm movements, Lung Hu Chuan has additional 4 arm movements that can be used to deflect even the hardest attacks smoothly and softly (refer to Ba Men).

According to Taoist Philosohy attack and defense are only differentiated in the way they are viewed. Therefore every movement in Lung Hu Chuan can be utilized as either offensive or defensive. The movements are the same. How the movements are applied depends on the particular situation, as well as the inspiration of the user.